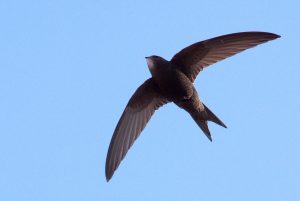 Swifts are amazing and beautiful birds that arrive in Ireland each spring from their winter homes in Africa.  Alas, year after year there are fewer and fewer of them flying about in our skies.

What can you do to help boost the swift population in your local area? Listen to Swiftly Declining, as Cleo deVito and Lynda Huxely talk to secondary school pupils, environmental groups and concerned citizens about building nesting boxes and other positive action to save these precious wild visitors from disappearing from Irish skies.

This program was produced and presented by Cleo deVito and was funded by the Broadcasting Authority of Ireland with the Television Licence Fee.