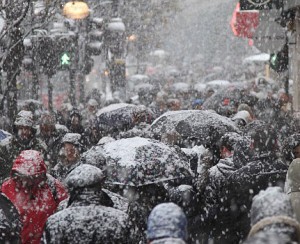 It’s Christmas Eve and Alicia can’t find her 6 year old son in the crowds in Limerick City Centre. Meanwhile, Colm is in love with his workmate Lisa but doesn’t have the courage to do anything about it. Eileen lives in a tiny bedsit and can’t face another Christmas alone, Gerry the wino has been kicked out of yet another pub and Billy, the 6 year old, is about to step in front of a speeding van hurtling down O’Connell Street…

Octopus Soup Theatre Company presents This Night, a play for radio by Liam McCarthy, which will air on CCR on Sunday next (Dec. 21st) at 5 p.m. and on Christmas Eve at 11 a.m.

Liam McCarthy is a playwright and actor originally from Limerick. He started writing for the theatre as a drama student in Trinity College, Dublin. His play A Talent for Lying was first performed in March of this year and his new play Alya will be presented at the Collaborations Festival, Dublin in 2015.