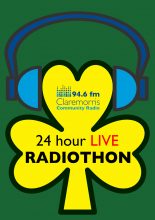 There’s less than a week to go to the 2017 CCR Radiothon, a fundraising event featuring over 24 hours of live radio.

This day of live radio will be launched on Thursday, March 16th, at 6pm with a special 2-hour show, hosted by Dolores Keaveney, which will include interviews with several of the volunteer hosts who will be on-air during the event.

The Radiothon will obviously be in full swing when the St. Patrick’s Day parade takes to the streets of the Claremorris and this event will be covered, via an outside broadcast from Symmetrix Hair Salon in The Square.

Here is the full schedule:

It promises to be a terrific event and a lot of fun too.  All volunteers are currently seeking sponsorship for their live programmes, so please do support.