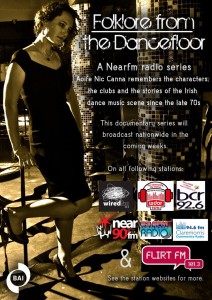 Folklore from the Dance Floor is a fantastic new series starting on Claremorris Community Radio 94.6fm on Friday 1st  March at 8pm.

Join Limerick native and House DJ Aoife Nic Canna as she looks back over the last 35 years of dance music and club culture in Ireland.

The series will remember and portray the clubs and the music from the disco inferno of the late ‘70s, up through the rave explosion of the late ‘80s, and right on up to the present day’s eclectic mix.