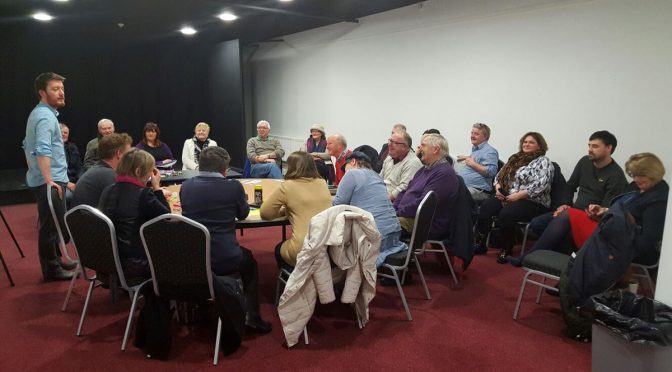 Claremorris Community Radio had its first members’ meeting of 2017 in the Town Hall on Tuesday night last. Members gathered to have an input into planning and strategy for the year ahead.  The meeting also gave members the chance to meet the station’s new Development Manager David Kitching.

The meeting discussed innovations in financial planning and fundraising to expand our reach into the community of Claremorris and the surrounding area. The station is actively seeking new members and to reinvigorate the participation of those already involved.

Those at the meeting discussed how to build on the station’s relationship with the community and to encourage more people to join and learn how to produce their own radio programmes.

Finally, the meeting addressed the station’s communication strategy: both internal and external. In the coming months, members will be reaching out to individuals, sports clubs, cultural organisations and other community groups to place CCR at the centre of community life in the area.  Internally, procedures are being put in place to facilitate improved coordination between members, the board and staff of CCR. The meeting was well attended and built a positive tone for 2017.