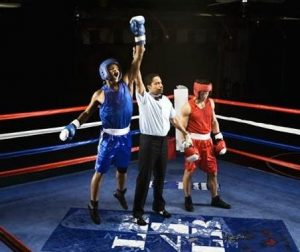 The CCR Sports Roadshow is returning to Claremorris on Friday, October 27th.  This boxing special will take place in Hanley’s Sports Bar, Claremorris, from 10.30pm.

Hosts Austin Garvin and Billy Fitzpatrick will be joined on the night by:

As during the summer, the show will be broadcast live on Facebook and then aired on 94.6 FM the following Monday and Wednesday evenings.